AGV helmets is a brand that's not as well-known to the American motorcycle market and helmet enthusiasts as other brands like Shoei. The reason is AGV makes mostly racing/sports helmets and has had little presence in America.

However, many of their models have become known by riders through tougher internet markets and word of mouth. One thing for sure, they are some badass looking lids that provide an aggressive look while protecting your head at the same time.

What's also good about this brand is that it has gone from being a start up company to one of the largest motorcycle helmet makers in Italy with over 200 models made each year.

Table of Contents
AGV Helmets - Complete Product Line
Full Face
Off-Road (Adventure and Motocross)
Modular
Brand History
But are they any good?
Professional Riders Who Choose AGV Helmets
Yeah but what about Nikki Lauda’s accident?
Research, development, and technological innovations brought into the industry by AGV Helmets
Where are AGV Helmets manufactured?
Who owns AGV helmets? 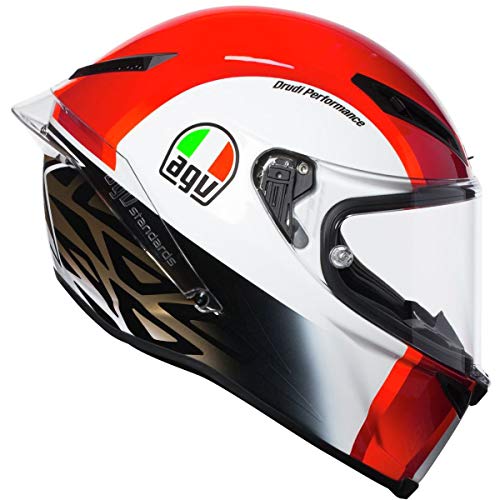 The AGV Corsa R is a lightweight open face helmet aimed at track day enthusiasts. The carbon fiber shell makes it durable and sleek while advanced aerodynamics allow for easy movement on the road or in race tracks. It’s SHARP and FIM certified, but NOT DOT or ECE, making it a helmet exclusively for the track (if you care about legality. The helmet is f**king fantastic for the street too. Just not legal) 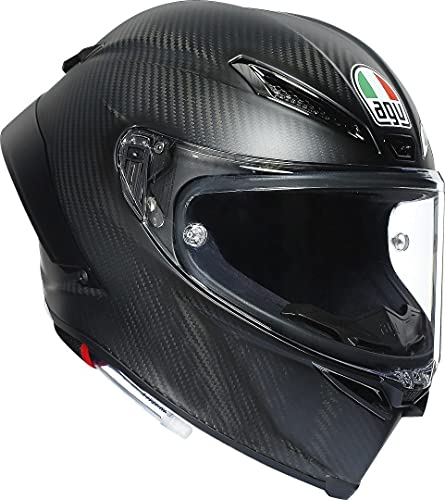 This helmet is an absolute luxury. The design of this unique piece makes it one-of-a kind, and highly sought after by those who crave attention. Beyond its aesthetics, the technology within this product surpasses other helmets on the market in a number ways; making it both safe for use when riding motorcycles and available to be purchased even if you're not someone important or famous. 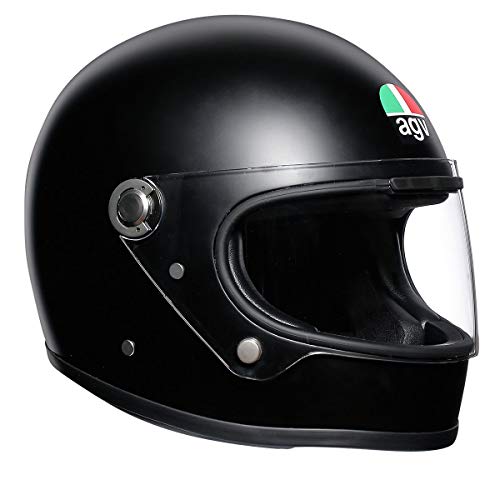 The AGV X3000 helmet is an exact replica of the original race helmets designed by Giacomo Agostini and Valentino Rossi. It’s built for modern bikes, but still has a retro look to it. Some may say that this expensive price tag isn't worth it, but those who choose to purchase one won't regret their decision because they know they're getting what's promised: high-quality workmanship with unmatched performance features at every level." 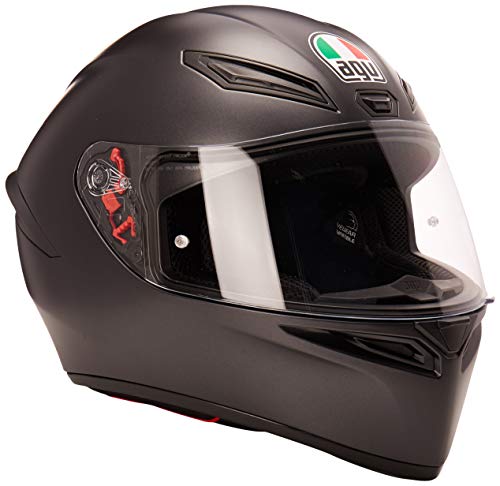 The AGV K1 might just be the helmet you're looking for. It's very much an entry-level sportsbike helmet with most of the look and appeal of track helmets like the Pista GPR or Corsa R but is far less expensive, at around $200 USD. A great choice for riders who want to get into riding safely without too high a financial burden on their shoulders! 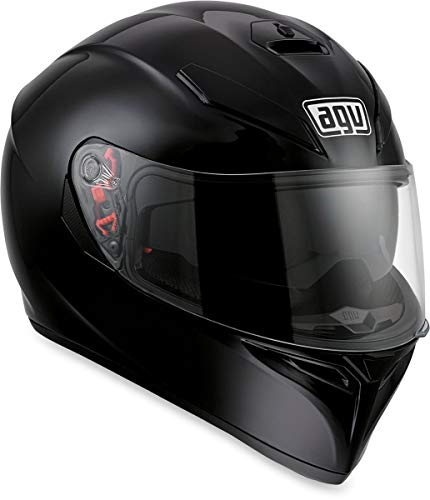 With 4 stars SHARP, the AGV K3 SV is an awesome racing helmet that will give you a lot more for only $10-$30 extra than the original. This helmet has a great combination of cooling and visor protection. The internal UV visor is really cool, as it's adjustable to various degrees so you can adjust your view on bright days while still having some sun-blocking coverage. There are also tons of vents in the front, back AND interior for keeping airflow going through when riding during hot weather. Though it might be difficult to say its name, we think this was due to all of the great features added at around a $200 price point. 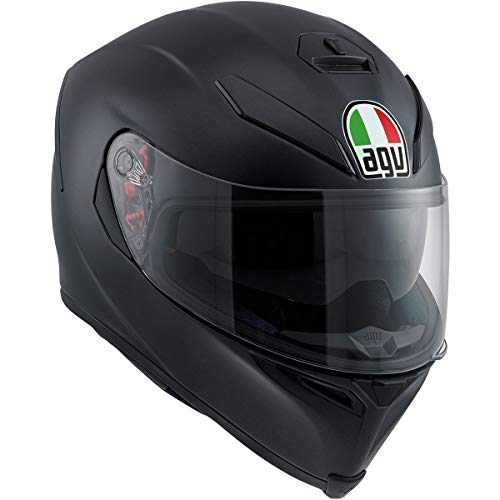 If you’re a high-performance rider, or just like the feel of professional-grade helmets in general, then you will appreciate this K5. Not only does it look good but it is also one of the more comfortable options out there. Although an updated model was released back in 2017 (the S), both models are still very similar and provide great comfort for riders who want that extra protection while riding their motorcycle at top speeds on dangerous roads with no safety mechanisms to protect them from falls or accidents along the way. 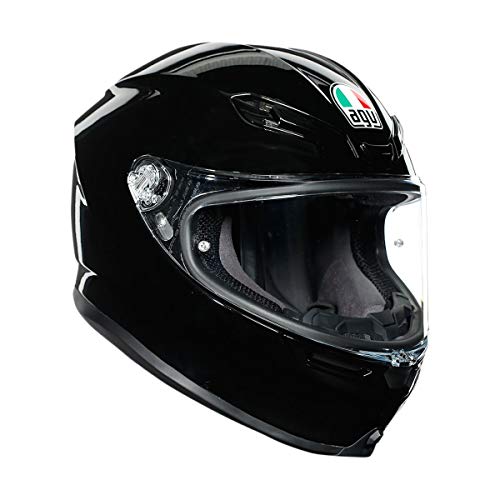 The AGV K6 is a great all-round motorcycle helmet. While not as light weight as claimed, it has excellent ventilation and bluetooth compatibility which makes this an exceptional sports touring helmet for most riders that can be highly recommended by owners. 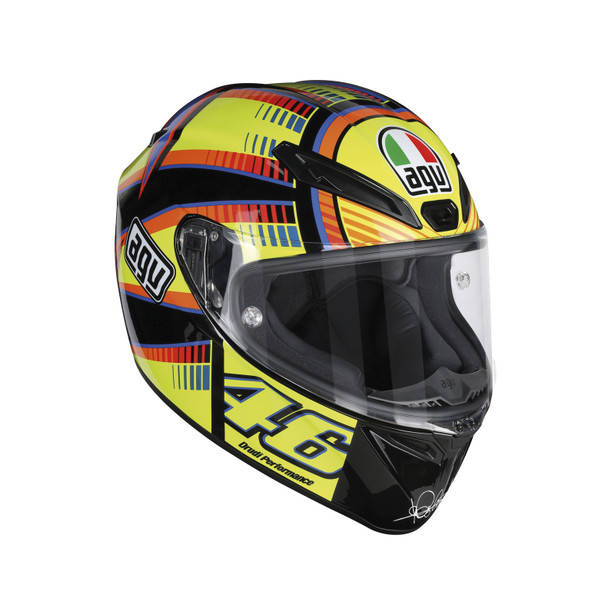 The Veloce S is a superb helmet. It's SHARP 5 Star safety rated, so you know it can provide great protection. With its tall shield system and broad coverage area, the helmets works well on sportsbikes that are typically noisy from wind resistance at high speeds. Besides some minor noise issues, this track-ready lid should be an excellent match for any sport or track bike due to its exceptional design features like comfy leather cheek pads and air vents to keep your head cool during long rides in hot weather conditions! 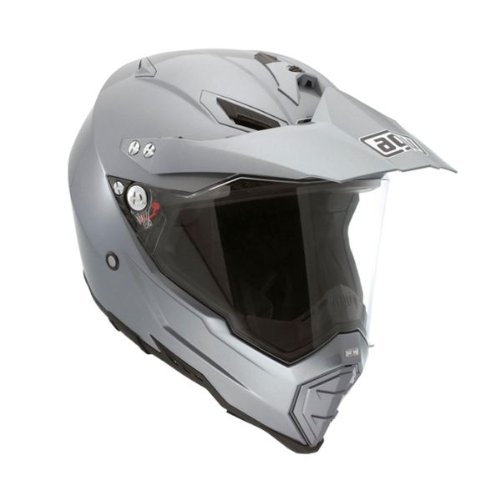 The AGV AX-8 helmets were introduced several years ago, but have recently undergone an upgrade of sorts and now come in a variety of configurations depending on your needs. The series includes motorcross or adventure versions as well as options with varying features like carbon fiber inserts that are lightweight for racing around the track. This is actually quite a good helmet at its price range; it does what you need without any bells or whistles attached to something more expensive - just right if you're looking for exactly what this one offers! 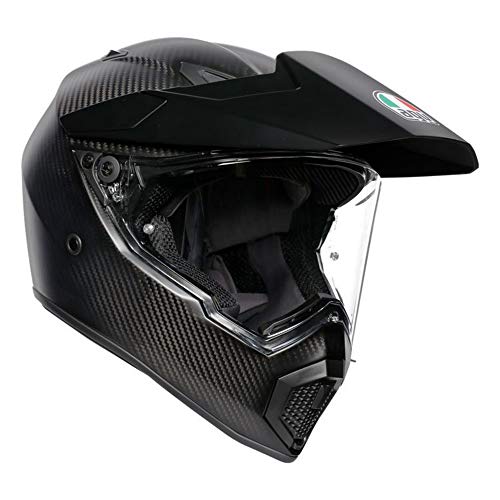 The AGV AX9 is a beast of an oven: it comes with extreme versatility and features that make the hefty price tag seem almost reasonable. The only question left to answer after you take one look at this helmet are whether or not you can afford it, but if so, then definitely check out the new upgrade from its predecessor! 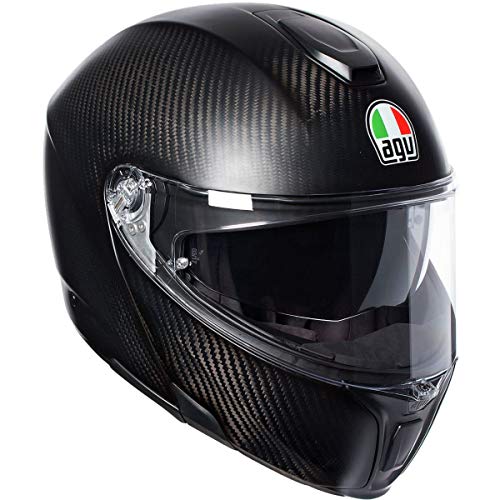 The AGV Sport Modular Helmet is a very accomplished helmet. This carbon fiber full face, including chin guard comes with an included drop down sun visor and Pinlock in the box. It's so beautifully made that it was rated by SHARP as 4 stars out of 5 for its track performance from a modular helmet line-up . However, there are only two issues that keep it from being on the very top of the helmet food chain: 1) The price can be high enough to make you flinch 2) There may not be air flow on hot days 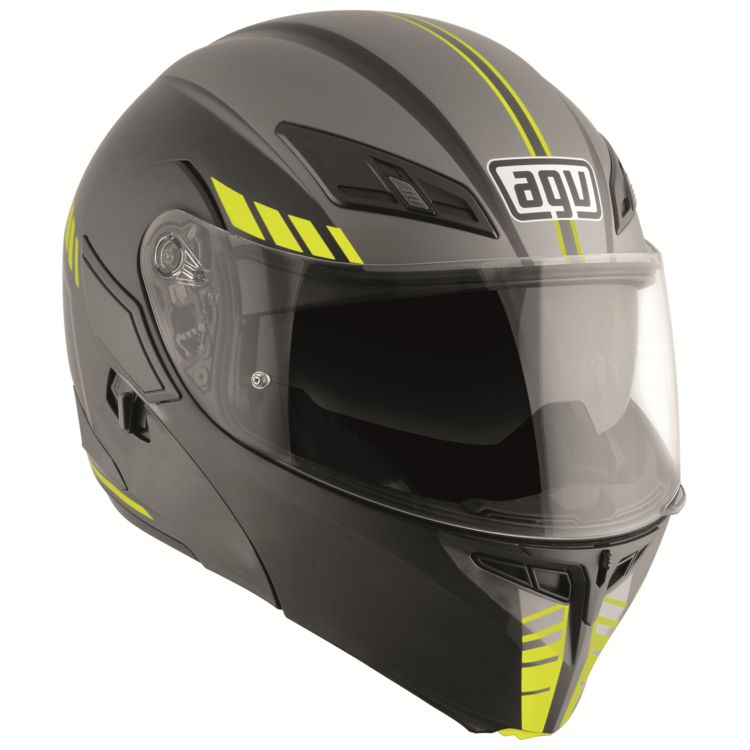 The Numo Evo ST is an affordable and modular helmet with modern styling that takes its design inspiration from MotoGP helmets. The flip-up face shield ensures added safety, while the 4 star rating awarded by SHARP in Europe makes it a safe purchase for any customer looking to get their hands on this kind of product within their budget range. 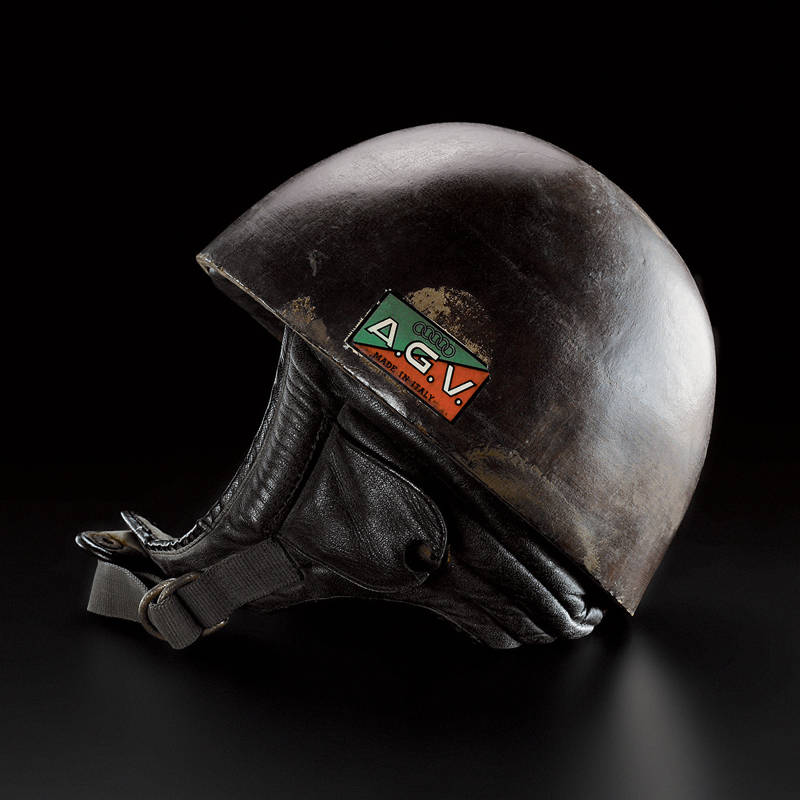 AGV was founded by Gino Amisano in 1946. The company name is an acronym of his own and the town where it's based, Valenza. Their logo incorporates the acronym within a helmet shape with red white and green colors to resemble the Italian flag on its side. Since their most famous rider, Giacomo Agostini always won from behind so he'd be visible as seen through other riders' visors this became inspiration for AGV’s design.

Throughout the 1950s, AGV worked closely with some of the best motorcycle racers in history. In 1954, they started making fiberglass helmets and shortly after that began collaborating with top riders like Kenny Roberts and Barry Sheene to produce innovative new designs. Later on, they also created technical partnerships with Italian racing legends Giacomo Agostini (15-time World Champion) & Valentino Rossi (9-time world champion).

AGV, a pioneer in product placement and film advertising, was quick to capitalize on its racing prominence. The company hung banners around the track's most photographed bends as well as used motorcycles for their advertisements - they were the first ones to do so! AGV also placed products into many Italian movies such A place for lovers by De Sica starring Marcello Mastroianni.

AGV has a history of sponsoring drivers in Formula One since the 1970's. They sponsored notable racers such as Niki Lauda, Emerson Fittipaldi, Keke Rosberg and Nelson Piquet. In 2008 Valentino Rossi was appointed an honorary president for AGV to celebrate his achievements with them over time

AGV moved into Formula One from the early seventies before eventually becoming one of several primary sponsors for many prominent racing figures throughout their career; these included World Champions like Niki Lauda and Nelson Piquet who were both recipients of high honors at races that carried other sponsor names along with it (Formula 1). Later on after Italian native racer Valentino Rossi won multiple titles including seven MotoGP championships

But are they any good?

This is really what y’all what to know and I’m just going to let this list of professional riders who typically put their machines at insane speeds on the track and trust the integrity of their heads to AGV in case of an accident answer the question for me:

Yeah but what about Nikki Lauda’s accident?

Okay so for historical context, during the 1976 Formula 1 Nürburgring race, Austrian racer and 3-time world champion Niki Lauda lost his AGV helmet. The thing flew off his head. Bad stuff. His car was on fire and crashed into rocks while he remained belted in it for almost a minute before getting out of the vehicle. He survived with severe burns to one side of his head after being rescued by track marshals who sprayed water onto him from their cans designed for putting flames off cars until medical help arrived at around four minutes later..

When interviewed in 2006, Lauda explained how the 1976 AGV helmet was a new lightweight and comfortable design that didn't quite fit. According to him, it would have been safer if he had stuck with his usual Bell brand for another season because then perhaps things might not have turned out as badly.

Lauda was compensated handsomely by AGV.

Research, development, and technological innovations brought into the industry by AGV Helmets

AGV was the first company to develop a modern helmet. Their helmets were made of leather and covered in fiberglass material that protected riders from head injuries without compromising their comfort or vision. They had no choice but to experiment with alternative materials before settling on an innovative solution and creating one of history's most durable motorcycle helmets by 1954 as well as being the oldest bike gear manufacturer today since they started everything off back then!

Where are AGV Helmets manufactured?

The AGV helmets headquarters and factories are in Mavet, near Padua, Italy.

In July 2007, AGV Helmets was purchased by Italian dynamic sports clothing company Dainese and in 2014 it was acquired by Investcorp of Bahrain for €130 million.