When you look at modern motorcycle helmets, many of them seem highly sleek and practical. They range from the simplistic half helmet to the futuristic full-face, but one thing is for sure - they all look contemporary. So what happens if you want something a bit more retro?

At first glance, this helmet looks like it came straight from the pages of a 60s or 70s motorcycle magazine. The domed head, the large open mask hole - it’s all designed to transport you back in time.

Fortunately, for retro enthusiasts, Biltwell Gringo only looks old-school. This product still adheres to modern safety standards, so you don’t have to worry about putting yourself in danger just to look cool.

So, let’s take a closer inspection in this Gringo helmet review to see what it does have to offer beyond its appearance. Realistically, anyone interested in the Gringo isn’t buying it for the features and specs - they’re getting it because of the way it looks. Nonetheless, you should know what to expect before putting this motorcycle helmet on your head. 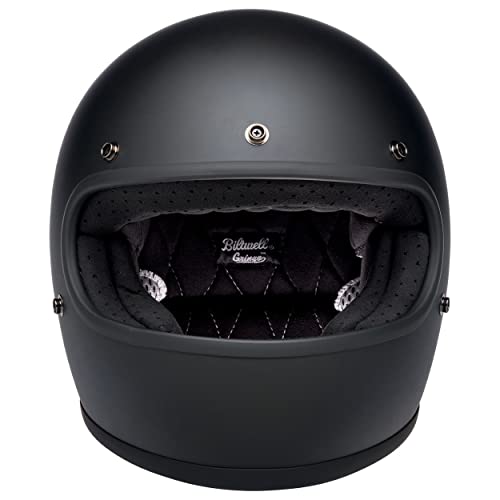 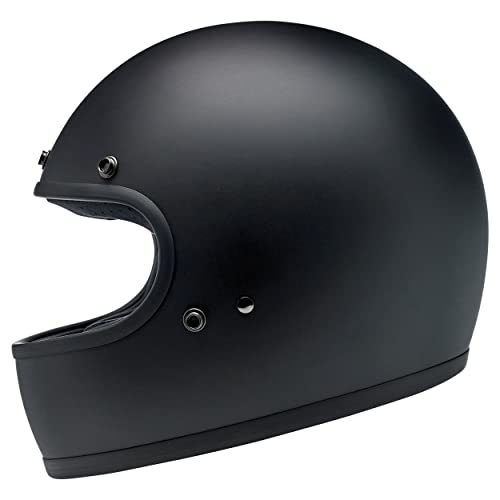 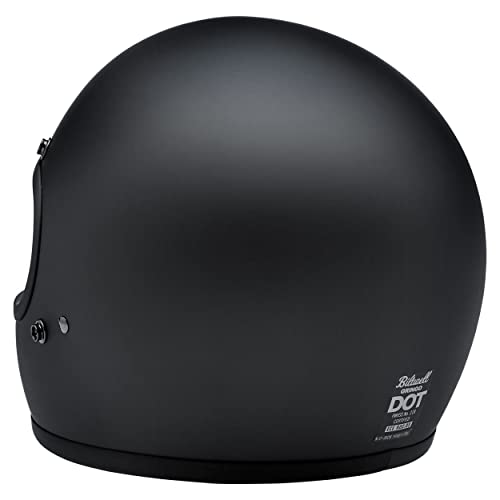 One of the nice things about the Biltwell Gringo is its simplicity. There is a single shape with two holes in it, and that’s all. This helmet is a bit rounder than other models by the company, which means that it fits a broader range of heads. If you’ve tried some of Biltwell’s other novelty helmets or three-quarter offerings, you probably noticed that they either fit or they are a medieval torture device.

Thankfully, the Gringo is much more welcoming and comforting than previous helmets. With six size options ranging from XS to XXL, this helmet will fit almost anyone’s head, unless yours is exceptionally large or narrow. If you’re planning on a long-distance road trip, though, be sure to practice wearing it around town first to make sure that it will stay comfortable.

The exterior of Biltwell Gringo is thermoplastic, which makes it rugged and dependable, and street legal, according to the US Department of Transportation. The interior is plush Lycra padding, which is used to adjust the fit of the helmet. Technically speaking, there are only two shell sizes, but you can get more or less padding based on the shape of your head.

Another aspect of the Gringo that made us pleasantly surprised is that it didn’t create an egghead effect. The rounder shape fits well for most riders and doesn’t make you look like a cartoon character.

Overall, if you’re trying to capture the spirit of the 70s while maintaining modern convenience, Biltwell Gringo is perfect for you.

We touched on this a little in the last section, but the interior padding for this helmet is incredible. Unlike other Biltwell offerings, the Gringo is soft and plush against your skin. The surface of the padding has a criss-cross pattern, which makes it feel better while riding, even at high speeds.

The Lycra padding is also removable so that you can wash it regularly, just as you would with any other helmet. This padding also calls to mind what you would have to do if you bought an original 70s-era Gringo-style helmet. Those versions were not designed with the same comfort and safety in mind, meaning that you would have to add plenty of extras to ensure that the helmet protects your head and feels good at the same time. Fortunately, Biltwell has taken care of all of that for you.

Because of the abundance of fits and sizing, virtually everyone will love wearing Biltwell Gringo. The only component that needs a bit of adjustment is the neck strap. This piece is a bit abrasive, so when you strap it tight, you won’t want to ride for too long before figuring out how to protect your skin. Otherwise, this helmet has all the right comfort features.

If you buy Biltwell Gringo off the shelf (digital or physical), it doesn’t come with a visor. That being said, it does have snaps so that you can attach one of several screens that the company offers for this particular model. The most common options are the Blast Face Visor and Bubble Visor with anti-fog technology. The wonderful thing about going with a snap-on version is that you can swap it out whenever you like, making the Gringo even more customizable.

One thing to note as well is that there is the Gringo-S, which comes with a flip-up visor. So, if you prefer that kind of visibility, you will want to get the S model instead.

For those who don’t want to mess around with visors at all, you can use motorcycle goggles instead. However, be aware that the front opening is not that large, so you will need to make sure that your goggles fit before hitting the road.

Also, if you decide to wear sun shades instead, the opening likes to funnel air around your face, which can cause the wind to get into your eyes. If you’re just bombing around town, this probably won’t be an issue, but be aware of this effect if and when you need to take the highway.

As far as the field of vision, Biltwell Gringo is perfectly acceptable. You don’t have to worry about losing your peripheral visibility, so you can see everything coming at you while on the road.

Once again, the people looking at the Gringo aren’t doing so because they want a helmet that checks off a bunch of different boxes. Instead, they like the retro appearance, and that’s what matters most.

As you can imagine, with only one front opening and no vents (more on that in a bit), road noise is a bit of an issue. This problem only gets worse if you wear the helmet without a visor, so be aware that you’ll get a lot of wind in your ears.

That being said, fans of Biltwell have likely been wearing three-quarter versions so far, so noise is generally not a concern. When comparing the Gringo to an open-faced helmet, it’s so much quieter. So, looking at it from that perspective, this model is a step up.

There are only two holes on this helmet - the one for your head and the one for your eyes. The bottom hole does fit a bit loosely, meaning that air does come in from the opening. If you snap on a visor to the Gringo, then the front hole is meaningless, so you will get hot while riding.

Driving on the freeway with the Gringo is probably your best bet for getting maximum ventilation. Street and casual riding are where the lack of vents will become an issue, so keep that in mind. However, since you can remove the visor, you should be able to customize your helmet accordingly to stay comfortable.

One way to increase the airflow is to remove the cheek pads, which is helpful for longer trips. However, few Gringo owners report overheating in this helmet, so try it first with the pads and see how it feels.

When the Gringo was first released, it only passed inspection by the US Department of Transportation. However, in recent years, it has been cleared for European roads (ECE), and it has been tested and rated by SNELL.

The ABS thermoplastic shell helps absorb impact and keeps your head intact in the event of a collision. Between the shell and the Lycra padding, there is an EPS foam liner, which further provides a buffer for your cranium if you hit the road head first.

A D-ring strap ensures that the Gringo stays on your head during a crash, and the snug fit also helps prevent any slippage or shifting. If you wear the helmet without a visor, we highly recommend high-impact motorcycle goggles to protect your face and eyes from potential debris. In that regard, the Gringo-S is technically safer because the visor is permanent, but it’s all in how you ride.

The front chin bar is made from the same thermoplastic and EPS liner, which does mean that it gives more than other full-face models. However, according to Biltwell, this chin bar design ensures that impacts are dissipated better, so keep that in mind.

Overall, this motorcycle helmet is highly rated for safety, so you can feel confident when wearing it on the road.

As we’ve mentioned throughout this review, Biltwell Gringo is made for retro enthusiasts, so if you like the look of it, you’ll appreciate all of its features (or lack thereof). You shouldn’t compare this helmet to other full-face models out there since this one will not have as many bells and whistles. Instead, you should consider how well it compares to other retro-style models or novelty helmets. From that perspective, the Gringo is incredible.

Where to buy this helmet :